Inside CHEMICAL AGENT: A THRILLER

In only a matter of days, readers across the globe--and maybe some within reach of the Milky Way galaxy, if they have a solid wi-fi connection--will sink their teeth into and let their eyes caress the words within my next book in the Jaclyn Johnson a.k.a. Snapshot series Chemical Agent: A Thriller. Today, we're going to let you in on some of the goings-on in regard to the plot and tell you a little about certain characters who appear in this game-changing story.

First, the cover. David Wood, as usual, did a fantastic job in selecting the image--we're going to Seattle for this one. Seattle is, as we've already settled, is Jaclyn's hometown of sorts: it's where she lived with her family prior to 9/11. The early plot sees Jaclyn and her entourage fly across the country to Washington State for a statue unveiling, but a murder cancels this. 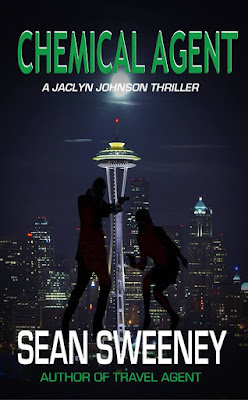 Jaclyn's mission: Eliminate the target who murdered (spoiler), all while confronting her past. There are plenty of twists and turns, as usual, but there's also a bit of emotion for Jaclyn in this story; she re-unites with her father's family, who thought her lost following 9/11, as well as some of her middle/high school friends.

She also discovers she has a bit of a stalker. Oh, boy....

Chemical Agent: A Thriller will be released on Tuesday, Feb. 16, 2016 in ebook and trade paperback form. An audiobook will be forthcoming.