What is REDEEMED all about?


Coming soon to all eTail outlets, REDEEMED by Sean Sweeney: 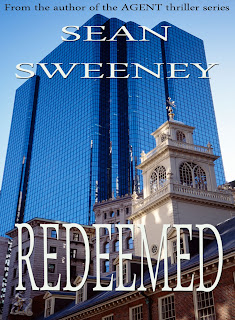 All he wanted was a second chance at life.

Duane Thompson’s incarceration following a crime-filled night on the streets of Boston lasted just a little over a decade and a half. When the Commonwealth paroled him, his second chance at life stalled. No one wanted him near their businesses.

Despite being dogged by the police officer that had initially collared him, Duane does get his second chance, helping the poor in a small Central Massachusetts city. But when a woman is hounded by the same cop, Duane comes face-to-face with his greatest challenge.

Yet unbeknownst to him, while all of this is going on an extremist government has begun reshaping Boston in its twisted image.

"Duane is evil incarnate - Sweeney has created a literary villain that will have you biting your finger nails as you read each of his thoughts and deeds."

--Bruce A. Sarte, author of A PHILADELPHIA STORY and SANDS OF TIME

"The first chapter left me breathless and the book stayed with me long after I finished it. Even now, the characters have not let me go."

"Through the character of Duane, Sweeney paints a near cinematic vision: he is a man who tries to take a plea deal but winds up being railroaded by the justice system. Upon his release sixteen years after the fact, Duane tries to start over fresh. But his past always seems to catch up with him, even when he turns around and tries to atone for all the wrong he’s done."

--Jeff Beesler, author of OPTICAL OSMOSIS and SPELL OF ENTRAPMENT

Posted by Sean Sweeney, Author at 12:32 PM No comments: