Over the last few days (hell, the last month), I’ve begun thinking about not only the 2017 business plan, but also my resolutions for the new year.

I have to be honest: I didn’t do well with my 2016 resolutions—I will blog more in 2016? Blogs were down from 41 to 29, not including this post. Significantly reduce my time on social media? You’re having a laugh—and I wondered if I would even do a list of resolutions because of this. Besides, I already did a post in early August about my goals for the next 12 months. I didn’t really need to do one.

But the great thing about setting goals and resolutions is that you have the ability to re-evaluate them at certain intervals, adjust things, and move on. And that’s what I’m doing today. Away we go:

I wrote approximately 219,000 words in 2016 over the course of two-plus books (the last 17,000 or so in The Peg-Legged Privateer, plus 101,437 in Ticket Agent, and the first 100,000 in Persuaded By The Reflections). I expect I’ll get another 25,000 words in Persuaded written before I wrap it up, but at 70,000 words I thought I would need only 50,000 more to finish; we can re-evaluate that when we get closer. It’s quite possible that Persuaded will surpass Redeemed in published words (132,000+), and maybe even Redeemed’s first draft total (140,177); I think it might. I don’t really know where the count will end up, and I’m hoping the first draft will be done by the end of February. That’s not a drop dead deadline for the book, but that’s my hopeful ending point. The end of February will mean a late summer edit, i.e. July or August, and a late December release. For March through June, I’m planning on writing the ninth Jaclyn Johnson novel, and I’m still up in the air about what I want to do in the second half of the year. Quite possibly the new series I mentioned this past August.

I want to publish two books, along with freshening up some of the back list, in 2017

Ticket Agent is currently with Kim—it’s her birthday, by the way, so happy birthday to Kim!—and I’ve given her until the end of January to get back notes and corrections to me so we can have a February release, much like we have had for Chemical (mid-February 2016) and Ticket (late January 2015) in recent years. Persuaded won’t be ready until late 2017, but I’m not going to publish it until it’s absolutely perfect. I’m also not going to go up against the holiday season. My hope is that the book will be published before the year is out, though. It could need some work after I do the editing, or it could be one of the greatest things I’ve ever written (after taking seven months to write the first draft, it might be). But not only that, I want to take some time to freshen up some of my older work; I may give Royal Switch a pass-through, mainly to see if I can fix the opening to the story and move that sluggish info dump somewhere else. I want to go back through two of my old John Fitch V titles and see if they can be fixed up and brought into my current writing level; I also want to freshen up the cover for A Galaxy At War, and possibly re-title it. And I want to get Furball & Feathers re-issued by the summer, too. I’ve done a sketch of potential cover art for it, but is it good enough to be published? I’m not too sure.

You’ll recall in August I declared that all of my work needs to be in paperback following my successful appearance at the Plastic City Comic Con on July 31. The second one is coming on July 30, 2017, in my hometown of Fitchburg. So far, 12 of my titles, including the entirety of the AGENT series, are in paperback, and I wanted to have the entire catalogue out in paperback by Thanksgiving in order to sell for the Christmas holiday. That didn’t happen, and that’s my fault. Honestly, I should know how to do a wrap-around; I can do a flat cover easily, and do it on the cheap, but not making it look cheap. So what I need to do is look for a tutorial in my spare time—what’s that?—and learn this important book creating tool.

Pretty easy to do. I need covers for those, and I need the money to buy the artwork. That will happen when I can afford it.

This will be some of the things I do in the first half of the year: get the Square credit card reader, get book stands, and, little by little, buy product for the event, i.e. ordering 10-15 copies of Zombie Showdown by the end of January and having them on-hand and ready, buying X of Ticket Agent and all the others, etc. In order to have an even more successful con, I need to have all of these things ready to go.

Not exactly something in my control: this is akin to wanting 10,000 or more book sales in a year, because that’s something I can’t control. Laura Jennings has done a marvelous job on the first five audiobooks in the series, and I’m hoping she’ll continue in 2017.

I’m still here. I’m not going away any time soon. But still—my sales numbers do not reflect the numbers a full-time author should make, but again, that’s something that’s partially out of my control; I can’t rip people’s arms out of their sockets and make them buy my books. While I can turn a phrase with the best of them, my marketing skills are dreadful. I’ve relied mainly on word of mouth, Facebook links, Twitter, and—before 2012 and meeting my wife—ebook advertisers in eReader News Today and Kindle Nation Daily to varying degrees of success. I heard recently that one author got a BookBub ad without the pre-requisite review numbers, and I’m hoping I can do the same this coming year. Also some Facebook ads to encourage mailing list signups, Amazon ads, Twitter ads, and ENT/KND/BookGoodies/etc. I desperately need to re-claim my audience!

We’ll re-evaluate as the year goes on.

Earlier this afternoon, I hit the 100,000-word mark in my current WIP, Persuaded By The Reflections; Persuaded is the follow-up to The Long Crimson Line. Tallying that count up with the first draft count of the forthcoming Jaclyn Johnson novel Ticket Agent, plus the estimated ending of The Peg-Legged Privateer that I wrote in January, I end 2016 with about 218,596 words of fiction written. Rounding it up to a cool 219,000 sounds pretty snazzy, if I do say so myself.

Now, with only a few days remaining in the calendar year, I'm taking the time to recharge--in lieu of IBC Root Beer, I'm celebrating the 100K-word plateau with some reading and no fiction until at least January 2.

But in the meantime, it's not bad to look back on what I did this year, and also raise a beer in celebration:

In addition to 219K words written, I published three books. Yup, I released the seventh Jaclyn Johnson novel Chemical Agent, along with the third (and more than likely final) Alex Bourque mystery, Beach Blanket Bloodshed. Not only that, I also re-launched the two other books in that particular series with new cover art, as well as a bundle of those three books.

And if you missed it, I had an awesome Plastic City Comic Con back in July. I've also had Jaclyn Johnson optioned for TV and film.

To say that I hit writing and publishing goals is an understatement. When I plot out my goals, I work my ass off to hit them. That has been my mantra since I started writing. I had a good year.

Sales goals, of course, is a different story. I took a loss this year, and I'll be re-assessing my sales goals--or deciding whether or not having them is a good thing to begin with--within the coming days.

I'll be sure to let you all know as the business plan comes into clearer focus--2017 is on the horizon.

www.seansweeneyauthor.com
Posted by Sean Sweeney, Author at 3:27 PM No comments:

Happy Book Day, and Avast me hearties! THE PEG-LEGGED PRIVATEER is here!

Back at the tail end of January, you’ll recall I penned a blog entitled “Twenty-five First Drafts.” I had just finished writing the first draft to The Peg-Legged Privateer: A Tattered Sails Novel, and I was pretty happy with the job I did. And in the last few weeks, I’ve talked about the characters involved, the creatures they encounter, and I even wrote up a short storyleading into the novel proper.

And now, it’s time to release Paulina out into the world.

Yes, folks, it is time. For the 25th time, it is time to celebrate Book Day. 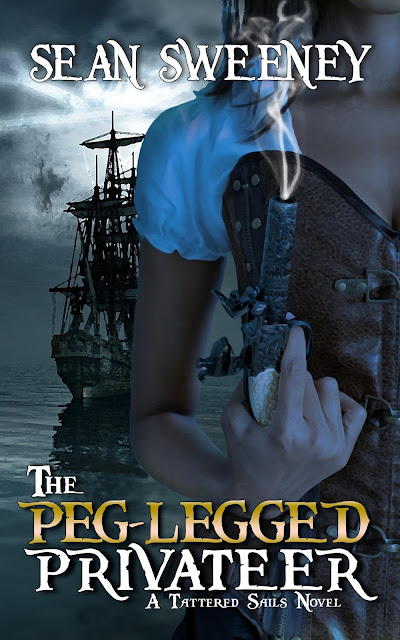 Here’s what the book is all about:

Long in the service of the 12th Baron Wilton, the privateer known as Paulina has reached her limit. Between a township that doesn’t care for her, the Baron assuring her pledge that she’ll go down with her last ship, and his lascivious advances toward her newest paramour, Paulina plots to betray him.

She just needs a little help in the form of her all-women crew to do it.

Taking four ladies along with her, Paulina takes the Good Queen Bess for her maiden voyage through the Caribe, where mystical beings and scoundrels alike look to thwart her and send her to the Realm of the Locker.

But they don’t count on the steel and magical energies this quintet utilizes to stain the wine-colored waters an even darker shade.

Set in a parallel world to ours and in the Golden Age of Piracy, The Peg-Legged Privateer: A Tattered Sails Novel will quicken your pulse in more ways than one. It features the fast-paced action you’ve come to expect out of me, as well as a brash female protagonist—again, what you’ve come to expect from me.

Get your copy in either ebook or trade paperback (trade paperback available only from Amazon at the mo) today, and remember: paperbacks make great stocking stuffers.

Posted by Sean Sweeney, Author at 3:36 AM No comments:

Getting to know the CREATURES in THE PEG-LEGGED PRIVATEER

About a week or so ago, I introduced you to the characters that make up the dramatis personae in The Peg-Legged Privateer: A Tattered Sails Novel, which releases tomorrow (TOMORROW!) on all ebook retailers (it's even available as a trade paperback, and pirate books make great Christmas presents, wink wink, nudge nudge). Today, I want to glaze over the creatures that are involved in this fantasy tale.

The Lusca is only mentioned a few times and doesn't truly make an appearance in the book, but it is a massive part of the opening. A creature with the arms of an octopus and the head and body of a shark, the Lusca has rammed Paulina's most recent ship entering the novel, has killed Baron Wilton's nephew, and has caused a great loss of life.

The servants of Maricote, and by extension, the servants of Onyx Wren. Bettina calls them the "Squigglies." The Leviathans are massive water serpents who protect the Bess at Onyx's command.

A group of undead who are at the command of an unknown entity in Dominica; they attack the Bess mid-Caribe. Yes, they are re-animated magically to walk over water.

The rock troll and the serpents on the Isle de Mordre

In looking for Battleneck Bruce's booty, Paulina and her shipmates must navigate through an island of pitfalls, and these two particular beasties come one right after another.

How do they survive against all of this? You'll have to read the book to find out.

www.seansweeneyauthor.com
www.tatteredsails.info
Posted by Sean Sweeney, Author at 6:27 AM No comments: