Early in May, I released THE JACLYN JOHNSON EXPERIENCE, a box set on ebook only to all online retailers. Right now, it's priced at the low, introductory price of $4.99. Five bucks for nine books, plus a novella and a few never-before-seen short stories tied into the world? Really, it's an unbeatable bargain.

How long will I keep the price at $4.99? Right now, I haven't decided. I had originally said that price would remain in effect until Mother's Day. That was last month, and it's still priced at $4.99. I could keep it there until the Fourth of July, but again... I want as many eyes on the box set as possible, and who knows how many shares, retweets, etc. that I'll get. I want many people to purchase this set at $4.99 before I raise the price. After all... it's a bargain. Legal thievery. And all that. People should easily one-click a nine-book box set at that price.

And that cover is absolute fire. 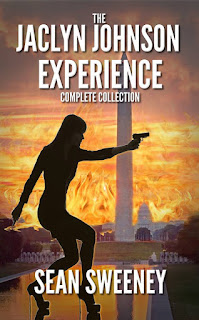 Seriously, there are flames in the cover. That's just how fire it is.

Q: Why just ebook? Why not an ink-and-paper version?

A: The answer is simple: I've always been about producing low-cost books for consumers. I know it's their money and they can spend it how they want, but I don't want people to drop a ton of cash on me. Back when I originally published The Obloeron Trilogy, back when it was just a trilogy, it cost readers upward of $30 for a trade paperback book, with the fonts uber-tiny to make sure the costs were kept to an absolute minimum... and it was still $30. That's just how it is in the indie world. This is a nine-book endeavor, plus a novella, plus some short stories. This would be upward of $100 for three separate thrillogies -- if that's a word -- editions, because there's no way to get all nine in one. No way at all.

Q: If I have all nine books separate, why would I get the box set?

A: Do you have the novella? I know you don't have the shorts. This edition gives you everything. And it's only $4.99 that you weren't using, right?

Q: What will happen if you decide to write another Jaclyn novel? It wouldn't be the complete collection then, would it?

A: At some point, I will write another Jaclyn... just not right now. I have an outline/plot treatment that's been stewing for some time. Maybe I will get to it in a couple of years, after the Glorious series is done and dusted, or after I get fired from the soccer job. And then again, I could start a whole new JJ series, just not under the AGENT moniker... which is how I had planned to do things seven or eight years ago, but I was talked out of it. We'll see. My mind might change by then.

A: Sure! I'm sure it's up on a pirate site by now; download to your heart's content. But please be sure to tell 10 people about it, because that would be so nice.

Q: And where can I get it should I want to get it by legal means?

A: Very simple. It's available on Kindle (US/UK), Nook, Kobo, and Apple iBooks. If you're in another country outside of the US/UK, you can always click the link and easily pop in your Amazon extension (.de, .ca, .au, etc) in place of .com or .co.uk.

Q: What are you working on now?

A: Right now I'm a few days away from giving Glorious Slip -- current working title, may revise it -- its third-draft read-through. The hope is that I have nothing to do to it and that I can ship it off to Kim by the Fourth of July for her eyes, as well as to Bruce for re-title suggestions. Once that's done and dusted, I can get started on the cover -- I have to give Kent a call -- as well as the second book in the series. I'm hoping to get that started in August, but if not, October is a more reasonable time frame to get it underway. I'm also halfway through an erotic thriller that I will release under a pen name. Just need to work on the transition from the erotica part to the thriller part.

Thanks for your support!

www.seansweeneyauthor.com
Posted by Sean Sweeney, Author at 3:41 PM No comments: