An Author Who Hated Reading--For A Time

This blog has been a long time coming, and I'll tell you why.

Once upon a time, in a small city in north central Massachusetts called Fitchburg, there was a teenager named Sean. Sean was your average, run-of-the-mill teenager. He liked sports and girls, listening to music on the radio, and watching his favorite television shows. One of the things he didn't like, though, was reading.

There was one good reason for that. He had nothing to read that interested him.

Oh, of course there were the books that his teachers at Fitchburg High School force-fed him, books that are so-called classics. Books from a long ago age, with what he considered dull writing that didn't seem to spark any interest in him. Books that his teachers needed to pull his arm off and beat him over the head with it in order to get him to read it. He shrugged, didn't read them, failed his English courses, and somehow still went on to become a fantastic author and sportswriter.

Hmmm, you're saying to yourself. How can that be? How can one be an author if that person doesn't like to read?

The answer is simple.

Sean was about 15 or 16 when he and his mother walked into his local WaldenBooks store, a store where he would later meet a local author named R.A. Salvatore and put him on a path toward writing his first novel. You've probably heard of him. Anyway, Sean's mother was in the romance section on this fine Saturday. Not wanting to see his mother pour over the bodice rippers, he moseyed over a few feet to the Science Fiction/Fantasy section. Sean had been a fan of the Star Wars movies growing up, and his father had handed him The Hobbit when he was 11. He liked it enough. Lo and behold, as he peered those shelves, he found quite a few Star Wars novels. There weren't many.

If books had voices, they called to him, begging him to ask him mother to buy them.

"Hey ma," he said, turning to her. "Can we get some of these Star Wars books?"

Hand to Cthulhu, Sean's mother walked over and swiped them all into her basket. And suffice it to say, he traveled to that Galaxy Far, Far Away many times, gobbling up those books--and soon waited for more.

But what else could he read, that would hold his attention, while he waited?

Enter John Grisham. Books like The Firm, The Runaway Jury, A Time To Kill, The Pelican Brief. Stories about law with an interesting plot (and a little sex, too). But once the new Star Wars came out, he would get it, bring it home, and devour it. Books--Star Wars books--soon became his drug of choice. He didn't find those books boring. Far from it.

From there, he found other great authors and turned into a rather voracious reader. He finally read Lord of the Rings, reading the three books in less than a month. He's moved on to find great authors like Michael Connelly, and Jim C. Hines, and Mario Acevedo, and David Forbes, and Kevin J. Anderson. He discovered Vince Flynn in the remainders section ten years or so ago: when Flynn died last year, Sean felt as if a member of his own family had died.

Nowadays, he's writing his own stories--he's currently writing his 20th full-sized novel, and he's written a few children's books and short stories, too--but he still has a love of reading that carries him through the days. He rarely watches television. He reads great fiction that entertains him, fiction that doesn't lull him into an absolute stupor with dry writing--much like the books he was supposed to read for school. He has Kindle practically everywhere he goes, and it's not out of character for him to read a bit before a ballgame. And what is he reading now, you ask? Star Wars: Scoundrels by Timothy Zahn.

So you see, teens of today: there's a lot of symmetry between you and your elders. Yes, they were forced to read the same books you're being forced to read today (it's the case for those of you at Fitchburg High School; hello, Wuthering Heights). But when someone says for you to do some independent reading, you shouldn't say that it's "mad boring as shit." You need to find the book that--like it did for me some twenty years ago--grabs you by the throat and pulls you in. There is a book out there that will do it for you.

www.seansweeneyauthor.com
Posted by Sean Sweeney, Author at 1:57 PM No comments:

A New Year, A New Friend

Please allow me to wax poetic this evening instead of talking about my books.

This past fall was, by far, one of the worst I've experienced in my life.

In the span of 6 1/2 weeks, my fiancee Jen and I had to put down two of our horses. Cheesi, short for Parchessi, was 35 years old: an ancient age for a pony. We put her down on the morning of September 16. Three weeks later, J.R. suffered a horrific hoof injury. And while we thought he was out of danger two weeks later, he developed an infection in the joint and we realized that he would never recover. We put him down on November 1, and the pair are buried practically next to each other in our deep backyard. I've owned several animals in my life, but I never cried more when J.R. went down, coughed several times, and finally went silent. I'm sure that I will feel inconsolable when we have to put Alex, their companion horse, down whenever that happens to be. I hope it's not soon.

Since the middle of October, Alex, a 20-year-old retired thoroughbred in the bloodline of Northern Dancer (1964 winner of the Kentucky Derby), has been alone. He has wandered around our paddock, taken his meals in solitude, and has had his fill of hay.

Earlier today, we changed that. 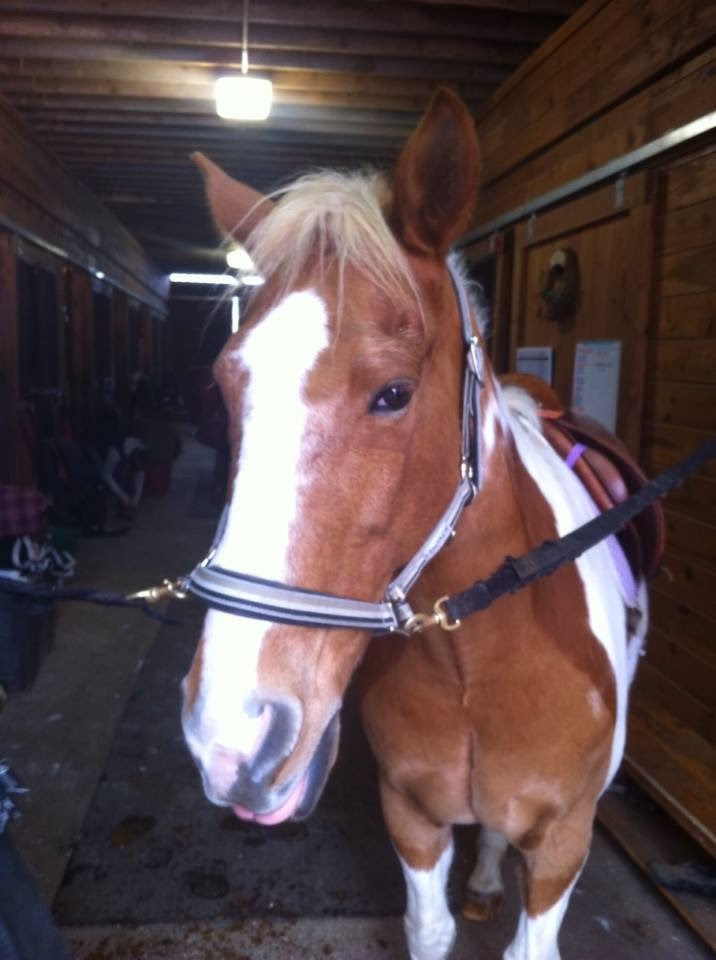 Jesse is owned by a friend of Jen's, and she has loaned him to us in order to give my fiancee a horse to ride. Jen rode him back in the middle of November, and we finally were able to get him here today. 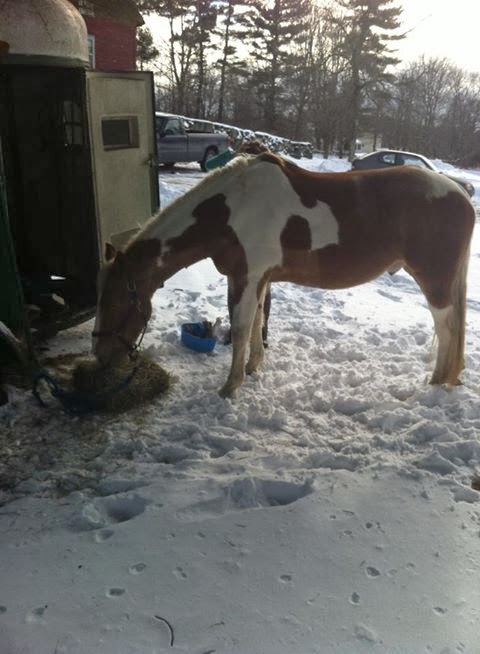 Jesse, having a nip of hay before he heads into the paddock. 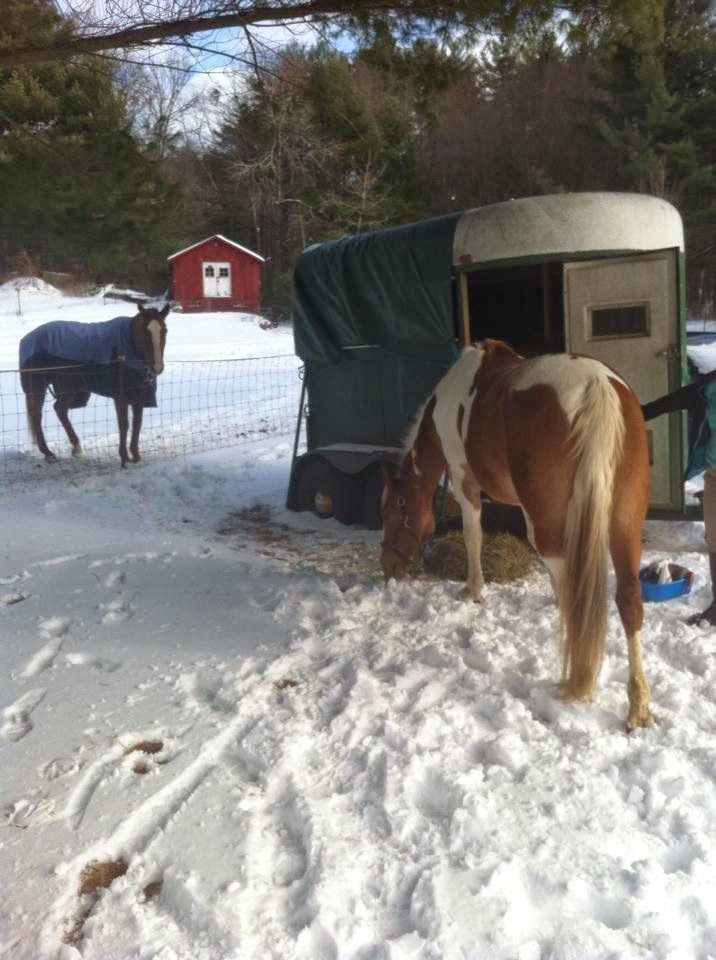 Alex, left, wants a little bit of that hay that Jesse is nibbling. 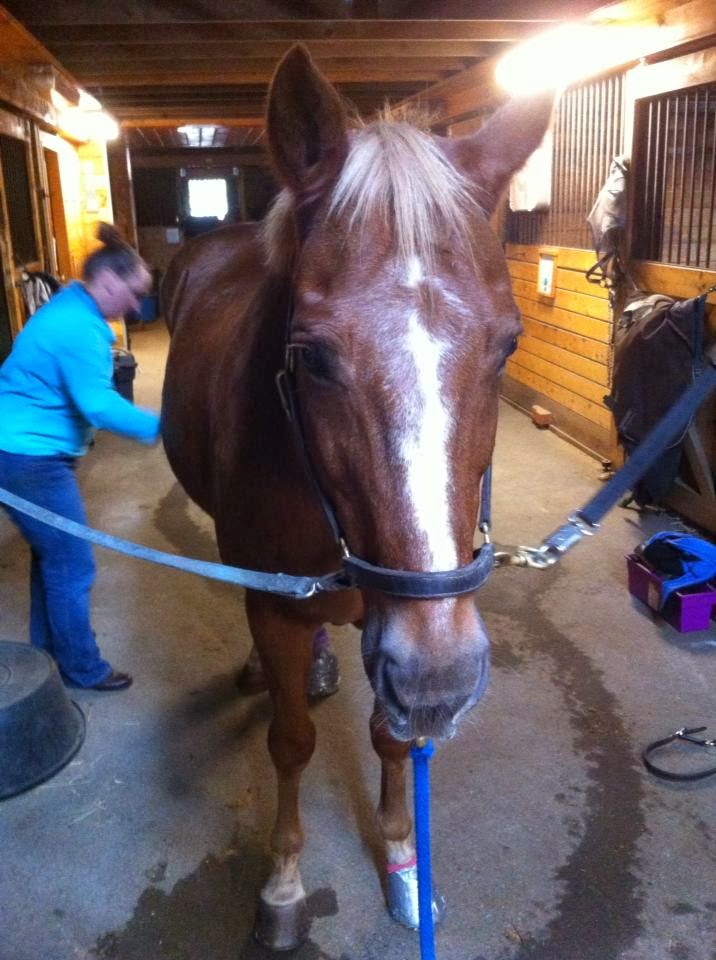 J.R., getting attention from Jen after his injury. I miss the Bubba.

While I know that Jen is uber-excited to have a new horse to ride--Alex is retired because his right front hoof is flat, shall we say, akin to a human collapsed arch--I think Alex is more excited to have a new companion in the paddock. When Jen brought Jesse into the yard, Alex trotted over to the gate, and the two sniffed each other's muzzles. Once he got into the paddock for the first time, they sniffed each other some more before they trotted and cantered together. And what I find to be a refreshing change, they shared each other's hay without the other getting snippy: J.R. was protective of his hay, let me tell you.

This is a great day for this family. I want to thank Wendy and Jim for loaning Jesse to us. He will be loved here at the farm!

The Changes Of An Author

Saturday marks eleven years since I first began writing my first novel. Back then, and for the next nine years or so, my writing style was rush-rush-rush, get-the-story-out-and-move-on-to-the-next-one. Show vs. Tell was a foreign concept that I didn't understand. At the time, I thought it was the best way for me to write. During a good week, if I wrote 20,000 words, it was a good week. Heck, a poor writing week still gained me 10,000-12,000 words. That's just how I wrote back then. It's how this author rolled.

Over the course of the past year or so, I've changed. But I've seen more changes in me as an author than anything else.

My writing process has changed. I'm no longer writing at the crack of dawn, and I rarely will write in the dead of night. I'm taking a great deal of care in my writing, where I'm making sure I'm awake, fed, and completely coherent before my fingertips touch the keyboard in a productive manner. I'm not writing 2,500 and 3,000 words a day any longer; in fact, if I get to 2,000 words, I've had an unbelievably fantastic writing day. If I've written 1,500, I'm satisfied. Truthfully, anything better than 0 is fine to me now. I'm writing slowly, not getting more than 300-400 words per hour. I'm choosing the proper metaphors. I'm trying to use my characters' senses more, and I'm staying within the proper point of view.

And I'm doing better to make sure that everything makes sense and is correct the first time. It makes the editing process run more smoothly after I'm finished, and it makes for a better read for the reader when they one-click on Amazon, Nook, Kobo, or iBooks.

Who said you can't teach an old author new tricks?

www.seansweeneyauthor.com
Posted by Sean Sweeney, Author at 4:54 PM No comments: