After nearly two and a half years -- an absolute lifetime in the publishing world -- I've published my 29th novel and second under the D.L. Boyd pen name today, that being the first of a time travel historical adventure and romance series, Glorious Slip.

No, I'm not crying... well, sort of. I am definitely crying.

The reason? I never thought I'd get this book out. It was a long time writing the first draft, more than a year, given that I had new jobs -- trying to get money into a house when you don't have a college degree is tough, and when you are partially handicapped with a heart ailment, there is only so much I can do -- and Kim had a computer issue (not her fault at all!). Then trying to find the right cover... and sure, this doesn't exactly scream Revolutionary War: 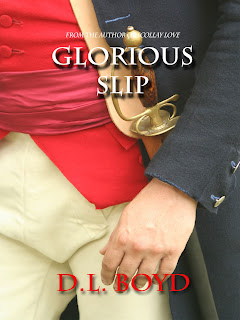 Honestly, I'm so happy with the way the book came out. The story was several months in the making, after I had read Outlander and was aghast that Diana Galbadon took upward of 47 pages to get Claire Randall back to 1745. I thought to myself, "If I took 47 pages to get my protagonist to her destination, my readers would put my book down and find something else." Determined, I did months of research outside of what I already knew about the Revolutionary War, and I sketched out the entirety of this three-book series. I wrote then I could, given the new jobs that I had. Sometimes I went weeks without writing, until the offseason of the Major League Soccer season between 2018 and 2019. While the Revolution were in Spain, and with no streams of the matches to watch, I buckled down after SuperDraft and belted out the last few chapters. I did some revision and added some Doc Brown-esque writings -- you'll see when you read the book -- and then edited it over the summer of 2019, in between Revolution matches.

Kim did a wonderful job in editing, I got it back in February, and then waited. But now the book is live, to my joy. The first book that I've published in over two years... you have to forgive me, I'm emotional about it.

I hope you enjoy it, when you get to it. It's a solid read that introduces you to the character of Nick Smith, who must keep silent about what he knows... and in the second book, which I'll start writing this fall sometime, is when things start to really pick up. It's a suitable first book in a series, and at 99 cents for the ebook, it's a good value. I know a few people who have picked up the paperback and have raved about it.

Happy Book Day, Glorious Slip. You're out in the world, and I couldn't be happier.

Pick up your copy at the links below: