To cut my nose off to spite my face, or no? Free book indecision.

Catchy title, is it not? It is. Oh, it is. And it can be explained in one anxiety-riddled blog post.

I've battled a demon for these last few months. The demon is a tricky one, since it has been the driving force behind my good fortune when it comes to this publishing/book sales game I've played these last few years.

Yup. It's the demon of indecision, the demon of whether or not to take Model Agent, the first book in the Jaclyn Johnson code name Snapshot/Agent series, off perma-free status and make it a paid book on Kindle and iBooks again.

Through September, readers have downloaded Model Agent in excess of 103,000 times for free, with a little less than 900 paid copies through Nook and Kobo. On iBooks, MA is still good for well over a hundred downloads a month. On Kindle, not too many. For instance, in September, MA saw 158 free downloads on Apple; in August, 197, in July, 187. Last month on Kindle, there were 79 free downloads; this month, 28. The sell-through over the last few months has not been spectacular; in September, I sold a grand total of 52 books; 26 were through Kindle, Nook, and Kobo, with another 26 through Apple. This month, I'm at 19 before the Apple numbers come through, and I'll get this month's Apple numbers in the middle of next month. I told you: not exactly great.

The theory of making a book free, especially in a series, is to sell-through the remainder of the series, and use the first book as a loss leader. The sell-through, from Model to Rogue to Double and so forth, has been decent through Double: as I've explained, I bought ENT sponsorships for the first three, and that is part in parcel of the series' draw. As I've reported, I was unable to get one for Federal Agent, which recently eclipsed the 700-copy mark; that book has been out for three years. The most recent two books, Literary (JJ5) and Travel's (JJ6) numbers aren't exceptional, and sales are down across the board. I don't know if people didn't like the first three or just don't know if there are more books since I didn't get an ad for Federal. If I'm being honest, the writing in these latter books is better than the writing in Model. Some people are buying and downloading them, yes, but are doing so in small quantities instead of the rate of purchase from a few years ago.

So what to do? It's a question that doesn't have an easy answer: If I take MA off perma-free, what will happen to my Apple sales? What will happen to my Kindle sales? They are low as it is, and if the perma-free is driving what I have for sales as it is, well... I don't want to think of what my sales would be without Model Agent being free. And if I'm being honest, I don't have another series at the moment with a first book to use as a new loss leader.

This may require a little more thought... maybe until the holiday season passes.

www.seansweeneyauthor.com
Posted by Sean Sweeney, Author at 7:52 AM No comments:

Kobo doing it again with a 50 percent off sale

I've mentioned before how we authors are a pretty obsessive bunch, especially when it comes to our book sales. I won't re-hash it, but you can find my obsessive-compulsiveness in my archives.

This weekend, coupled with the release of THE OBLOERON SAGA and the need to increase the pre-orders in the days prior to Monday's release, the good folks over at Kobo are going to have me and many other authors doing a frantic F5 every waking minute over the next six days or so: they are running another 50 percent off sale on all books published through Kobo Writing Life, and thankfully, I'm one of those authors who do this, and only use Smashwords for iBooks and other reading entities; I upload to Kindle, Nook, and Kobo separately.

This means that for you Kobo users out there--you can pre-order THE OBLOERON SAGA and get it for something like 48 cents. 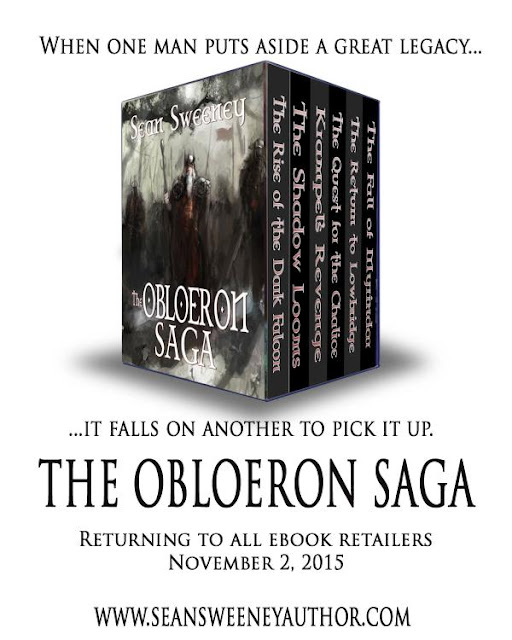 Really? Six books plus three short stories for only 48 cents?! Seriously? My other books from $1.50-$2 each? I have two words for that, ladies and gents, and that is LEGAL THIEVERY.

And I love it.

So go on, Kobo readers, go on and do it. STEAL MY BOX SET. I double dare you to. Do so for half the price this weekend, using these coupon codes at checkout:

Here's the link to all of my books on Kobo. HAVE AT IT!

www.seansweeneyauthor.com
Posted by Sean Sweeney, Author at 12:10 PM No comments:

Have you pre-ordered THE OBLOERON SAGA yet?

We're just under a week away until the triumphant return of THE OBLOERON SAGA to all eTailer shelves, and I just have one question--have you pre-ordered your copy yet?

You haven't? Oy, vey, what am I going to do with you lot?

Yup, you guessed it. I'm going to inundate you with a bunch of links.

For those of you with Kindle, click here and simply fix the URL to your particular country/Amazon shop. For those of you with Kobo, click here. I don't have a link for Nook's placement yet, but you can always sideload on Nov. 2 through Smashwords, or you can wait for Nook's placement to pop up; in related news, Nook should allow for pre-orders. It will only cost you a measly--A MEASLY--.99 cents for six books, plus three short stories which tell you the full story of the goings-on on Obloeron.

You don't know the entire story.

In one week--Monday, November 2, 2015--you totally, totally will. It's almost here. Pre-order today.

www.seansweeneyauthor.com
Posted by Sean Sweeney, Author at 12:45 PM No comments:

When one man puts aside a great destiny, it falls on another to pick it up. 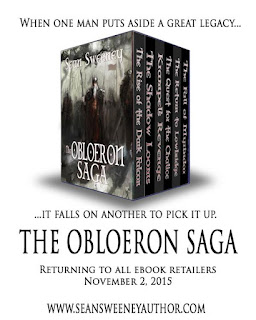 This is the full, six-book THE OBLOERON SAGA bundle, which first appeared in 2009 under my old pseudonym, John Fitch V. The first five fantasy novels were published before 2013, and now the series comes together with the previously unreleased third novel, KRAMPEL'S REVENGE.

In addition, there is previously unseen prose in the form of three short stories the author has weaved into the tale, and gives the full look at some previously unanswered questions from the original three novels.

Starting with the short story The Creation of Flad-rul, the SAGA tells of Krampel Paddymeyer’s journey from that of slave to bounty hunter, from bounty hunter to war hero. Then the original trilogy picks up with Krampel’s grandson, Grumpet, his heir, as well as the tale of Radamuck Rosar’s journey with these two great men. Add in a halfling with a warrior complex, a bit of love, and plenty of orcs, and you have a fantasy story set to stand the test of time.

Coming SOON to an eTailer near you! Join my mailing list (the form is at the top of the blog) to find out when it's available!

www.seansweeneyauthor.com
Posted by Sean Sweeney, Author at 11:16 AM No comments: