Since I don't have much time to spare this weekend--today is an errands-and-laundry day, and tomorrow is the first day of the Clark High School Basketball Tournament and I'm working it all day; and Monday is a travel day--I wanted to go over a few things with you that I haven't mentioned here recently.

First off, Persuaded By The Reflections is finished. The first draft is, anyway. The MS clocked in at a little over 135,000 words, and let me tell you: I'm overjoyed by that total. At it stands, its first draft total is slightly less than what I wrote for Redeemed, but I published that book at 132,000 and some change. I don't expect to make any cuts to Persuaded; if anything, I'm going to enhance the story and add to it. Since I finished it on Feb. 6--the day after my Patriots won the Super Bowl--I'll give it a respectful three months to June 6 before I start editing.

If everything goes correctly, and if the pre-readers I have lined up give me the feedback I need and do so by the end of August/middle of September, I see no reason why this book can't be in your hands by the end of November. The pessimistic side of me says January or February of next year, which would mean nearly a year between releases.

And maybe in hardcover? We'll see about that.

Secondly, the launch of Ticket Agent went fairly well. There was one day this week where I didn't sell a copy, but so far, so good. Would love more eyes on it. I'd actually like more eyes on the entirety of the now-eight book series: I think I've said this before, that if half the people who downloaded Model Agent for free liked it and moved on with the series--it's $2.99 for each digital book, people--I would be a happy miser indeed, and I wouldn't have to cover high school sports again (although there's a part of me feels that I'm being pushed out of that profession right now, but that's another story). That's the ultimate goal, to get out of sportswriting on my own terms. Getting solid sell-through in the Agent series will aid in me achieving that goal.

Third, I have an outline for the ninth Agent novel, Scouring Agent, printed up. I've been thinking about what I'm going to do in Scouring Agent since November--actually, I had an inkling of one scene back in February or March of 2016, and it just built from there--and I've finally put it all together. I made the outline linear yesterday; before, the file was just a jumbled, out-of-order series of notes. Now it's a four-page treatment of awesome, and today I can see the book clearer than I did last year. This novel will have a different feel to it--at least that's how I intend it--and I'm planning on starting it next Thursday, after I get back from Cape Cod. What I may do is similar to what I did for Ticket: write a short story leading into it that I'll give away here on the blog, one that doesn't have the pop of the novel proper but gives the reader insight to what's happening, then start the novel proper.

Fourth, I've already started doing some brainstorming on my next series, which I plan to release under the D.L. Boyd name. Can't say much more on that right now.

And finally... I've lowered the price on The Peg-Legged Privateer's digital version, i.e. Kindle, Nook, Kobo, iBooks. I had it listed at $4.99 from its December 12 release until earlier this week, and at that price, I only sold 15 copies. While I am grateful for those who bought it at $4.99, I hadn't sold a single copy in about a month, and let's admit it, folks: this is a volume business. I've expressed misgivings in the past about being able to command a price higher than $2.99 and do so with regular volume, and I think this experiment proves that I can't command a higher price. I feel this book--my return to the fantasy genre--is better than anything in The Obloeron Saga, and should have a chance to perform well, especially if I want to write a second book using these characters. At $2.99, I'm hoping to do volume sales. If you haven't taken Paulina and the Good Queen Bess out for a spin yet, you can do so at this link. A good price for a good book.

Enjoy your weekend, and by all means, pick up a solid read.

www.seansweeneyauthor.com
Posted by Sean Sweeney, Author at 3:22 AM No comments:

The day that everyone loves is here.

And no, I'm not talking about Valentine's Day--although if that's the way you roll, consider this your Valentine's gift from me. Simply put, it's St. Jackie-tine's Day!

In other words, Ticket Agent: A Thriller is now here and available and all that!

In the eighth full-length adventure of the blonde bombshell, Jaclyn and Tom are split up by a devious international tycoon who has his fingers in several entities, and they are following the clues laid out--and with the help of Tasha and Salt, the clues that aren't exactly out in the open. 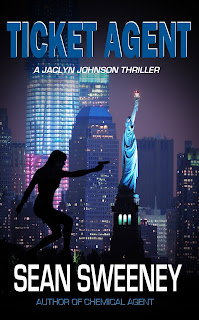 You can get your copy at the links below:

Please note: the trade paperback files have not been approved yet. When they are, they will be under the Kindle links. I will update the blog when it is listed.

www.seansweeneyauthor.com
Posted by Sean Sweeney, Author at 3:19 AM No comments:

A First Look: The cover to TICKET AGENT

As I promised on my Facebook fan page late last week, since the Patriots won the Super Bowl, I would post the cover to Ticket Agent: A Thriller today.

And since I'm a man of my word--well, if you were registered for my mailing list, you would have seen it Saturday evening--here it is: 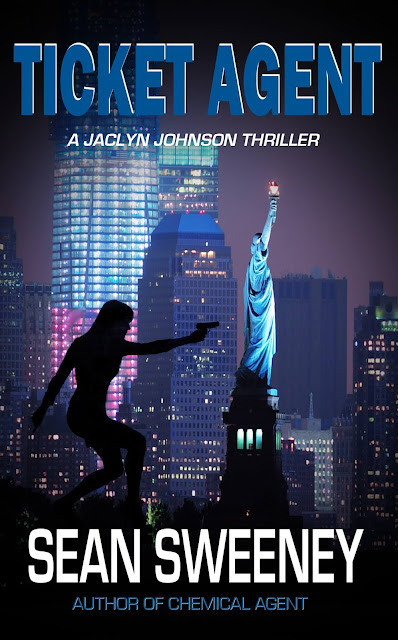 Special thanks to David Wood for the cover.

If you want to know when it's available for purchase, register for the mailing list. Newsletter recipients are the first to know EVERYTHING.

www.seansweeneyauthor.com
Posted by Sean Sweeney, Author at 9:09 AM No comments: