Getting to know the characters of THE PEG-LEGGED PRIVATEER

With Book Day approaching rather rapidly and will be here before we know it (Monday, Dec. 12), I thought it would be nice to introduce the characters you'll encounter when The Peg-Legged Privateer: A Tattered Sails Novel hits the virtual shelves. 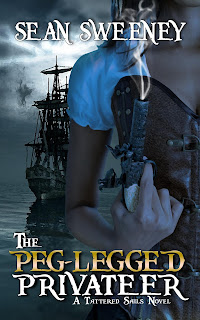 Paulina is the Captain of the Good Queen Bess, and starts the novel as a privateer for the 12th Baron Wilton, William Weaver. She is deceptive and witty. Can be brash in stressful situations. She is also slender yet busty, red hair, green eyes, with skin the color of milk. Her most dangerous feature? She has wears a golden foot from just below right knee. The story of that incident may be told at a future time. She was, however, orphaned at the age of 5; parents’ ship crashed and sank. She was in turn picked up by Weaver. She is heteroflexible, meaning she likes to have a go with both genders. Entering the story, she hassurvived her third ship sinking. Believes in the goddess Amphitrite.
Bettina Brewer
Starting the story, Bettina is a barmaid at a pub she owns in Port Regret, and becomes first mate to Paulina on the GQB. Her father was a privateer for Weaver before he drowned, and she left Spicer's Bay at 18 years old. When Paulina approaches her, she has grown tired of what she calls, "the land lover life." Built like an ox, many sailors have tried to woo the great barmaid, but they have all had their failings exposed by her broadsword. She is brash, yet insightful; a strike-first type of gal.
Molly
We meet Molly when Paulina arrives in Spicer's Bay, where she is a scullery maid to Weaver; was Paulina’s replacement in Weaver’s household/bed when the latter became a privateer; is Paulina’s current paramour. Molly is coy and demure, but also insightful. She is slender with black hair, and is busty.

I haven't explored Molly's backstory prior to her arrival, but it more than likely wasn't adventurous.

Sally Songspinner
Sally joins the crew of the Bess following an incident at a brothel called Regret's Pure Delights, where she stood as a strumpet; she becomes the unofficial second mate of the Bess. Blonde and slender with small breasts, Sally seems coy and demure at first but is easily angered when the situation calls for it. At the start, when wooing a pirate in the Delights, has a clipped, regular accent, but that accent turns salty when angered. Utilizes twin blades in combat.
Onyx Wren

The ebony-skinned witch doctor on the Bess. Onyx is an interesting character; she speaks without the use of contractions, and is a voice of reason and a calming influence on the Caribe. We learn that her parents were witch doctors who, like her, believed in the god Maricote; her mistress, at age 5, told her she has the ability to harness Maricote’s power. She uses powders to concoct cloud-like view screens, as well as particle drones from these powders to spy on approaching ships. Meditates, too. Uses balls of magical energy (“Maricote’s blessings”) to defeat enemies. She even has a pair of Leviathan snakes swimming around to do her dirty work.
And finally, William Weaver
As we've explained, Weaver is the 12th Baron Wilton of the Crownlands’ Wilton barony. An erudite and snobbish man, we learn that Weaver is a schemer. In the narrative, Weaver has been Paulina’s benefactor for many years, and he practically owns Spicer's Bay.

www.seansweeneyauthor.com
http://www.tatteredsails.info
Posted by Sean Sweeney, Author at 6:07 AM No comments:

A Casting Question: Who would play Jaclyn Johnson?

After I announced the optioning on Facebook last Friday, my pal Stephen Campbell suggested we play a little game called “Who will play Jaclyn Johnson?” in a potential future movie. Of course, I don’t know if I would have a say in casting should a studio pick the series up. Still, it’s always fun to throw around names.

Remember: this is just for fun. Others may have different thoughts, and by all means, add your thoughts to the comments section.

As Jaclyn: Hayden Panettiere, Ashley Eckstein, or an unknown up-and-comer

Wlad Klitschko’s wife and the voice of Ashoka Tano in Star Wars Clone Wars could fit the bill: both are relatively young and around Jaclyn’s age when she first appears in Model Agent. And both are blondes, so that works. I’ve always said I would want Panettiere as the lead, but Eckstein has the same qualities. A toss-up.

Of course, we may want to go with an unknown actress that audiences can grow to love instead of banking on automatic star power.

Alex’s character has to be not only tough, but a veteran actress who would command instant respect of not only the rest of the cast, but the audience, as well. Alex’s character resides between the ages of all three, and either could portray the no-nonsense director.

Vicki Vale is indeed presidential in my opinion, and Basinger has the ability to play a--spoiler alert--one-off character.

For Jaclyn’s British boy toy, we would need an actor with dark hair, one who is recognizable, and one who can be the strength and comfort she needs in private without truly needing the spotlight; remember, Harry Potter never wanted it, and Neville Longbottom didn’t seem to mind the background.

And if you think I mentioned that stuff for the Google hits, well, you know me too well.

We would need an actress in her late 30s/early 40s or thereabouts to portray the White House Chief of Staff. Gellar or Alba are right there.

I’ve never really given consideration as to who would play President Forrister before now, but he has to have that icy stare down for when he looks out over the South Lawn.

I’ve always thought of Parkerhurst being a John Cleese-type of character, but I would have to think we need someone much younger, in the area of Jaclyn’s age or maybe a little older, in order to portray the CIA quartermaster.

Another good question! We would need someone in his early 20s to portray the computer whiz.

What do you think? Do you think that’s an agreeable cast?

www,seansweeneyauthor.com
Posted by Sean Sweeney, Author at 6:56 AM No comments:

What happens before Ticket Agent begins.....

If you've read Chemical Agent: A Thriller, you already know certain events occur; these events are explained below in a Cliff's Notes-type of way. If you haven't read Chemical, stop reading now and grab it at your favorite online retailer... read it, then come back.
The following explains the start to the forthcoming Ticket Agent: A Thriller, and introduces a new character!

I spied the powder blue nose of Air Force One off to the side as Tom and I rode into the base in a black-as-night Range Rover, crossing the rolling gray concrete until our escort came to a halt, the Gulfstream waiting for us; I heard the warming engines as we opened the doors. Tom hopped out of the back first, carrying the large box full of Parkerhurst’s toys—we had checked the chamber on each McMillan before removing the magazines—onto our ride. We didn’t have a full military escort; there were no soldiers carrying weapons at the ready nearby. As far as I knew, no one outside of us, Tasha, Salt, Turner, Parkerhurst, Forrister, and Ruoff knew of our mission, and I knew the folks ferrying us from Langley to Andrews and from Andrews to Ellsworth had rigid security clearances. For now, I felt adequately sure the mission would go on uncompromised.
Once we got outside of Ellsworth, though, everything regarding mission security would be up in the air. I held out hope nothing would leak. It wouldn’t be the first time if it had; I wondered if we had executed the woman who had leaked info during my Detroit mission for treason yet.
I smiled Claire the Stewardess’s way as I stepped into the Gulfstream. She didn’t wait for me to tell her to close the doors; she did it automatically.
“Do you two need anything?” she asked as soon as she had shut out the noise of the East Coast from the cabin.
“Do you have a menu? In-flight movie, perhaps?” Tom said sarcastically.
My knuckles stung as I slugged him in the meaty part of his shoulder. He quieted down.
“We should be fine, Claire. Just a couple bottles of water will do; we’ll eat lunch on-base when we get to South Dakota,” I coolly replied as we sat down. She smiled and fetched us our drinks before she headed into the cockpit for the duration of the flight to the Black Hills.
I reached over and grabbed Tom’s hand, and when our eyes met, I gave him a soft grin, and I leaned in for an even softer kiss.
“Here we go again,” I said, just as I heard the engines turn from a dull roar to a heavy whine.
We’d be in the air in moments.

TO BE CONTINUED IN TICKET AGENT: A THRILLER


Coming February 2017!
www.seansweeneyauthor.com
Posted by Sean Sweeney, Author at 7:29 AM No comments:

The lead-in to The Peg-Legged Privateer

Coming Soon: The Peg-Legged Privateer: A Tattered Sails Novel. The following is the lead-in, what happens before the book starts. Enjoy!

TO BE CONTINUED in THE PEG-LEGGED PRIVATEER

www.seansweeneyauthor.com
http://www.tatteredsails.info/
Posted by Sean Sweeney, Author at 7:21 AM No comments: