The next twelve months or so for this author

Even though I’m under no obligation to do so as an indie, I like to set goals and—even more importantly, from my point of view—deadlines for my work. It’s something that not only keeps me sane, but also keeps me focused on the writing.

With the Summer of Edit finally in the rear view mirror, it’s time to take a look at the projects I’m working on over the course of the next twelve months or so. Be careful: your eyes may spin by this somewhat absurd, breakneck pace. Keep in mind, these dates are all tentative, and are subject to change without notice. Publishing dates, though... we'll do our best to hit those.

I haven’t decided if this will be a novel or a novella; I'm kind of writing this one from the seat of my pants. I have some ideas of how this story will go, but no idea as to the length. Much like Cold Altar and Voir Dire, I will tell it in first person. The hope is that I can have a full first draft done by Oct. 1; if it’s a novella or a short novel, then that date is no problem. Anything longer than 60,000 words may push it, but we’ll see.

In addition, I’ll brainstorm a project later in the fall, as well as the subplot for Chemical Agent.

This will be the final time I ever read this series before I re-upload it. I’ll read it on my Kindle, and my hope is that if there is anything wrong—misspelled words, passive voice—that the change in font will point it out to me for correction. Then I’ll format and get it ready for publishing.

Oct. 19 will mark four months since I completed the first draft of the seventh Jaclyn Johnson novel, so I’m hoping that I’m fully free of the story by then. That way, I’ll see any problems and correct them. In addition, I’m going to add a few thousand words to the existing story as I work on the subplot.

Immediately after that until the end of January—Working on the first draft of a project I don’t believe I’m allowed to speak of just yet. I’ve been invited into a shared world, and that’s about all I can say on this for now.

Self-explanatory. A reminder that the entire saga includes the as-yet unreleased third book of the prequels, Krampel's Revenge, along with never-before-seen prose..

It would have been about two months or so since I had finished the first round of edits by the week of Christmas. I’ll look at it again at about this time, changing the font on the manuscript to see if anything sticks out. Then, the hope is to send it off for a proofing by Christmas morning. That is if everything goes well. Cross your fingers.

Feb. 1-May 3—Working on the first draft of a D.L. Boyd romance novel/novella involving a sportswriter.

May 4—First read-through of secret project? Then start the first draft of JJ8, which should take me up through the end of July.

Early August—First read-through of the D.L. Boyd romance, then start brainstorming Cedar Junction, a standalone thriller that I will write in the fall of 2016. The romance will be published around Thanksgiving, maybe Christmas.

The hope is that I'll stick to the schedule. Of course, if I finish anything early, I’ll get to work on the next thing right away. Lather, rinse, repeat. And again, everything is tentative, and I reserve the right to make changes if necessary.

Stay tuned. It's going to be a great year.

www.seansweeneyauthor.com
Posted by Sean Sweeney, Author at 5:47 AM No comments:

Over the course of the last seven-plus weeks, when I wasn't headed to Cape Cod or busting my rear end in our vast vegetable garden, I've been at my computer doing what I call "The Summer of Edit 2015." As it is a rather big deal, allow me a few moments of your time to explain.

Earlier this summer, I wrote about how I'm in the process of reviewing my business plan and, at the same time, altering it. Starting some time this fall, I'm going to take out Facebook ads and possibly even Twitter ads. When I wrote the business plan blog, I explained that I had given away upward of 103,000 copies or thereabouts of Model Agent, but when it came to selling through the rest of the Agent series, I had only sold about 7,000 copies of the others up through the end of June. Some of the newer books, which have great writing if I do say so myself, hardly sell save to my die-hards. I've come to the conclusion that either a. Some people didn't like the story and have since abandoned me (which is completely in their purview), b. Some read it and liked it, but didn't look for more books (which is, again, in their purview, but it may be my fault, too), or c. Some people read it, liked it, but are now in a different position in their lives and don't have the same amount of time with which to read like they did a few years ago. It's an either/or situation, I think. Who am I to truly say what the situation is?

The Facebook ads, I hope, will help build my mailing list as well as reclaim some Model Agent/Rogue Agent/Double Agent readers that had liked the story, but didn't know about the other books. The ads should point people in the direction of my bookstore, where readers will find that, indeed, I have plenty more books out there, and that I haven't gone away. Now...

Some of those books, as you'll know by the painstaking edit work that I did of The Obloeron Saga earlier in the year, were supposedly edited by a grad student prior to publishing a few years ago. As I've said, they weren't. And some of the other books that I had also released, such as Scollay Love and Zombie Showdown, were also supposedly edited by this particular person. Again, they weren't. Shame on me for not checking their work, and shame on them for screwing me over.

If I'm going to alter the business plan and reclaim readers, I had to make a hard choice: There are some who think I should just let the older work stay in its older form, letting the stories speak for themselves. I'm not doing that--and I haven't. This was something that I need to do if the readers are going to take this indie seriously as an author. I'm going to be here a long time, and there are plenty more stories in me. I just need readers, keeping my fastball tuned so the readers stick with me. That meant I had to go back into my files and do some revisions to these stories and bring them in line with my current skill level. It was time-consuming, but I stress that this was needed. I've improved as a writer to the point where passive voice no longer infiltrates my writing from the get-go. Meanwhile, the older stories, the supposedly edited ones that weren't, had tons of it.

That is no longer the case.

In the past few weeks, I've worked on cleaning up Zombie Showdown, Scollay Love (under my D.L. Boyd pen name), Cold Altar, and Voir Dire. I've cleaned them up--in the case of ZS and SL, I've re-written a few parts to improve on the story and have deleted some lines to tighten the story--re-formatted, and I've now re-uploaded them to Kindle, Nook, Kobo, Smashwords (with the exception of Scollay Love), and now to Google Play. These were solid stories, but didn't really sell: that may be due to what I see as sloppy, amateurish writing/editing. And with me about to go back into the world of Alex Bourque--Cold Altar and Voir Dire are in his world--later this week, those two books needed to be sharp without any serious dilution to the story. The passive voice, which the editor should have taken out, is now gone.

The question, of course, is how much left is there to do? I will be re-reading The Obloeron Saga in October; I do not foresee any additional changes to that series, and it will be re-published on Nov. 2, 2015--two years to the day that I took it down. The Agent series continues as my best-selling series, and there are no changes to those existing books scheduled. The stories are solid, the writing crisp. The same with the recent stories of Redeemed, The Long Crimson Line, and The Lone Bostonian. Royal Switch, I may look into changing up a little (the opening is slow, but it serves a purpose), but probably not this go-around. The John Fitch V books of Turning Back The Clock, One Hero A Savior, and A Galaxy At War, no, I'm not going to change those.

It is my hope that if you do take a chance on me from this point forward, I will have gained a reader that appreciates my writing, one who knows that I have now put forth an impeccable effort--one better than I had before. I also hope that the reader will join the mailing list and keep picking up my new books.

And speaking of that, I must dash. I have a new book to write.

www.seansweeneyauthor.com
Posted by Sean Sweeney, Author at 12:19 PM No comments:

One of my favorite things to make for dinner stems from my hometown of Fitchburg, Massachusetts. And seeing as I'm going to write about Fitchburg again--well, the Small Town PI series, which is normally set in my hometown but will be focused on Truro, Mass. for this one--I might as well share one of my favorite recipes.

Before I met Jen, I used to eat quite a bit at Slattery's, a nice little eatery with a full bar not too far from where I lived. In fact, Jen and I met at Slattery's, set up by mutual friends of ours. And one of the things I ate there--heck, always ate--was Chicken, Ziti, and Broccoli. I've adapted the recipe a little, and I make it every so often. Jen loves it, and it's pretty filling. 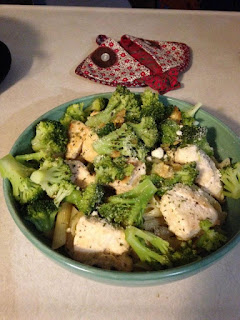 We start off by boiling water in a large pot. I usually add olive oil to the water and bring it to a boil. I add the pasta; penne takes about 10-12 minutes to cook to the desired texture. Penne is smaller than regular-sized ziti at my grocery store; rigatoni is too big. Any tubular pasta works.

In a small saucepan, I mix olive oil along with several tablespoons of butter, and then throw in some fresh, chopped garlic. I automatically set the burner to its lowest setting. I sprinkle in some dried basil, and I'll stir this mixture every few minutes up until about 15-20 minutes have passed.

In a large, oiled skillet, I place sliced, tenderized chicken breast pieces and pan-fry on medium heat for about 15 minutes total, turning occasionally. Midway through, I'll grind up some salt and pepper, then turn again. At 10 minutes in, reduce heat and sprinkle on some grated Parmesan/Romano cheese. I will also sprinkle in some bread crumbs; if you want, you can use panko. We tenderize the chicken so that it is done in 15 minutes. Your chicken should be golden brown.

For about 10 minutes or so, steam your broccoli. I don't want my broccoli soggy; I want it firm.

Once everything is done, layer your dish: pasta first, followed by your chicken pieces, then broccoli. Spoon in your garlic/butter/oil on top. Sprinkle on some additional Parmesan/Romano to taste, and top with parsley flakes or fresh parsley from the garden.

www.seansweeneyauthor.com
Posted by Sean Sweeney, Author at 5:34 PM No comments: