This week has been such a whirlwind that I didn't have time to write this blog post until today. Two days ago marked Book Day of Persuaded By The Reflections: A Thriller, my 27th novel. 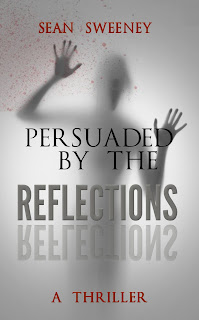 And in about two months or thereabouts, we'll have novel No. 28--the next Jaclyn Johnson novel, the ninth overall--available for readers to sink their teeth into. Imagine that.

So how did Persuaded come about?

My father's cousin Anne had read The Long Crimson Line: A Thriller during a family trip to the Caribbean last summer, and she gave me great feedback on her return. She also wanted to see the storyline continue--which was interesting to me, because I hadn't plotted out anything beyond Ricky sitting at that Causeway Street bar with Amanda Kovack. The Long Crimson Line, to my eyes, was a standalone.

However, after thinking about it for a few weeks--and knowing how standalones don't really sell, looking at my sales numbers for that particular book, which is a shame since TLCL has some of my best writing--and after getting more feedback from other readers, I came up with the storyline I put forth in this novel. TLCL is now the first book in a potential trilogy, currently a duology. I have a potential third book involving Ricky percolating in the back of my mind, and more than likely would write the book in late 2018-early 2019. We'll see, depending how the Glorious series evolves.

(And I'll tell you more about Glorious when I feel a little more confident about the story.)

One of my pre-readers and good friends Ted Flanagan called Persuaded "gritty." I liked that. He also called the setting--Worcester, Mass., a place I visited in Model Agent: A Thriller--an underutilized resource. It's quite possible I will use Worcester again. I don't know how, but I may.

And so, Persuaded is in the wild, and we're having a great launch so far. I hope you'll give this book a shot.

www.seansweeneyauthor.com
Posted by Sean Sweeney, Author at 6:09 AM No comments: