A few months ago, one of my dear friends from high school, Kristen, had posted on Facebook about an event coming to the local area: Plastic City Comic Con. Leominster, Mass. is the Pioneer Plastics City--you know those pink flamingos in your yard? Yeah, those were made in Leominster--and with a character resembling Plasticman wearing Johnny Appleseed's steel pot cap on its signage, I thought it was a marvelous idea. There are some folks in our area who can't get to a "bigger con," i.e Boston, Connecticut, New York, and I also thought it was great for them to be able to experience a local show.

But for a small city, the Plastic City Comic Con was HUGE. Allow me a few graphs to explain. 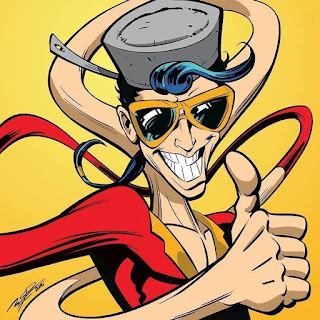 Sensing opportunity--and knowing how well some of my NYT writer friends sell and sign at these types of shows--I contacted them to see if it was at all possible for a local author to get a table, shake some hands, and sell some books. And seeing as my breakout character is a comic book character residing in the pages of a thriller novel--my pitch was, "She's basically James Bond meets Lora Croft meets DareDevil."--I thought it was a good mix.

I emailed Keith Gleason, the promoter behind this convention, and I must say Keith was incredibly amenable to me coming to the show. He said it would be mainly comic books, getting back to the feel of the older cons--i.e. San Diego--which have just morphed into springboards for certain properties to show off their newest ideas, movie trailers, products, etc. Again, very cool idea. Keith has, as I understand it, been in the trenches, so to speak, at cons. He's been in the business for a long time. He welcomed me.

Seeing as this would be my first convention, I really didn't know what to expect. I certainly wasn't expecting a line from my table going out the door. I ordered 25 copies of CHEMICAL AGENT, my newest Jaclyn Johnson novel. I wanted to make sure I had enough. I didn't want to have too few for an eight-hour show. Jen had asked me if I wanted to do a few other books, and I hesitated... no, I had said, I just want to do CHEMICAL... just to get my feet wet. I didn't want to break the bank on product that wouldn't sell. More on that in a second.

And speaking of getting my feet wet....

I wanted to do as professional a job as I could on my meager budget. I needed a banner explaining who I was; I thought they would be too expensive, and I managed to get a good one at Staples the day before the convention. I wanted to do bookmarks, just as a giveaway to folks; J.A. Konrath always gave away drink coasters at signings. I ended up giving away a sheet with my bibliography on it, all 24 novels plus the next two coming up. As the event went on yesterday, I had more ideas on how to liven up my POP area for future cons.

When Jen and I got to the Leominster Veterans Center, the convention site, just before 9 a.m., we were led to our area in the basement hall, and we quickly set up:

When the doors opened at 10 a.m., we were flooded with people, and I sold a book right away to an old friend of the family who just happened to be with the first group through. People came, potential readers came up--"You've written 24? Where are the others?!?" one gentleman asked; Keith had said collectors will want them all, and this is where Jen looked to me and said, "You should have listened to me."--and some took my bibliography. Some passed us by.

I wasn't the only author there: I met Scott Goudward, who was right next to me; he runs the New England Horror Writers Association. Also met Jim Dyer, who sells his late grandfather's work. Erik Radvon was across the way. Some of the things they had--Scott had the Square credit card swiper for iPhone, which I immediately typed into my iPhone as a must have for my next event, and he had book stands (I just stood the book up in front of my stacks), too; Erik had his name into his tablecloth, which would have been a whole heckuva lot easier--would have made my displays better, I think. Hindsight. Again, first con. Next year, more product--I'll have three new books by then, plus some of the back list--better POP, etc.

There were periods where no one came up to my table (Jen played on her phone, while I tried to start conversations; some didn't say anything in return). This is where panic sets in; I have all these books, no one's coming over to buy them, I'm a failure, I shouldn't be doing this... but I remained calm and looked to the positive: people were glancing at my banner, they did take in my website; these are all people who had never heard of me before today.

Of course, there were cosplayers up the wazoo: a couple of Doctor Whos--Fourth and Eleven--a Pikachu (there were loads of phone-wielding folks looking for Pokemon), not to forget a 1960's era Penguin, a Dark Knight, and a Michelle Pfieffer-esque Catwoman. My cousin Camryn was a Gryffindor. And there were a few Harley Quinns, too.

We also had a visit from the one and only Bob "R.A." Salvatore: 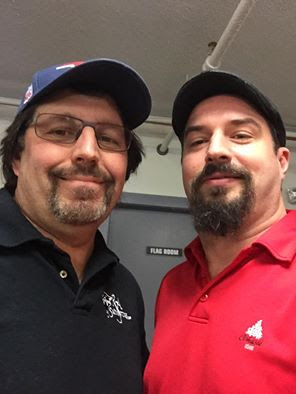 Bob has been a great supporter of my work for years. He came right through the basement exhibitor door with a buddy of his and came straight to my table. Gave him a big hug, thanked him for coming out, and we got to talking about the business for quite a few minutes. Always a wealth of knowledge, Bob is.

I also guesstimated that we had a massive amount of people going through the aisles; I told Bob around 1:30 p.m. or so that there had to have been well over a thousand people come through by then. Many vendors went home happy.

All in all, I sold nine books, which Keith said was an amazing amount of books for a con this size. Winning? Winning. Also, it was an invaluable learning experience.

I can't wait for next year.

www.seansweeneyauthor.com
Posted by Sean Sweeney, Author at 4:07 AM No comments: