The last couple of days, outside of Christmas, I've been hard at work on making INCOMING PRIVATE SHOW a much better book. Earlier in the week, I took many hours editing and polishing the novel up, bringing it up to fourth draft status.

And now, I have a cover for you, as well as what the book is all about: 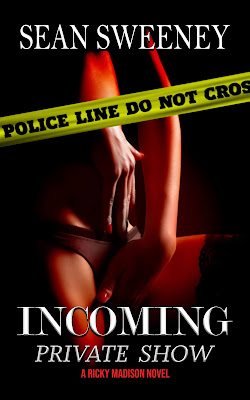 When 20-year-old Alyssa Young is murdered at work, police in her hometown of Worcester, Massachusetts have little in the way of clues. And when Detective Ricky Madison discovers what she does for a living — she’s a cam girl, an Internet stripper — and that it’s difficult for anyone to know where she is working, it’s a head scratcher that he doesn’t think he can solve without help from her friends. Two are away, and one of her co-workers is useless.

But when one of her best friends, too, is murdered in the same violent fashion, Ricky wants to prevent a third death from hitting his streets.

A public plea for help gains him critical information, and it leads him to look into Alyssa’s past to find the unscrupulous person behind it.

I honestly cannot wait to show you the book. I hope you enjoy it.